You are here: Home - Regeneration - Employment, Enterprise and Skills 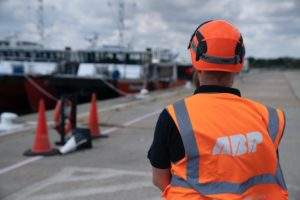 The employment focused projects aim to provide facilities, employment land and premises to capitalise on the continued investment in the clean energy, engineering, maritime and science sectors, to ensure an increase in long-term employment opportunities including higher skilled jobs that raise aspiration.

Lowestoft sits at the gateway to many of the current and future offshore wind farms just off the coast of East Anglia, placing it at the heart of the UK’s clean energy sector. ScottishPower Renewables and SSE both operate their Operations and Maintenance (O&M) bases from the town port. The town is strategically placed to capitalise on further growth in the sector, as well as benefiting from substantial job creation and supply chain benefits due to major infrastructure projects outside the town such as the proposed development of Sizewell C.

Lowestoft has a number of key anchor institutions within the town, including the headquarters of Defra Centre for Environment, Fisheries and Aquaculture Science (Cefas), a leading national agency in marine science, which is currently undertaking a multi-million pound investment in its Lowestoft headquarters, securing its long-term future in the town. 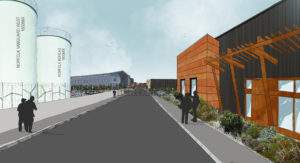 The project will create, new, high value jobs and unlock future inward investment, securing the town’s future as a hub for the clean energy sector. The development will include two key elements at vital entry points to the port:

Rehabilitation of South Quay Wharf which has been vacant for over 15 years to support future port uses within the clean energy sector both within Offshore wind and Nuclear. The project will be complemented by improvements to the public realm and overall appearance of the site by treating the boundary edge from road and waterside.

Land to the East and next to the Bascule Bridge will be transformed to provide a new public space overlooking the Harbour.

Hamilton Road, which is to the East of the town centre (North of the Bascule Bridge) will benefit from new streetscape to enhance the area and link the Port to other areas of the town including the town centre. The development will also include regenerating vacant space next to the outer harbour to provide new business facilities that will further enhance the towns reputation as the region’s operations and maintenance hub for clean energy. 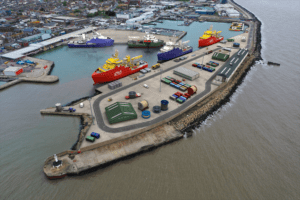 In 2021 Associated British Ports launched the Port of Lowestoft Masterplan setting out ambitious plans until 2040.

The Lowestoft Eastern Energy Facility (LEEF) is a £25M investment that will create 360m of berthing space with an increased depth of 5.35m for simultaneous use by three Service Operational Vessels (SOV). In addition, it will provide 1 acre of port side space that is tailored to industry requirements.

PowerPark will provide new business premises tailored to the Energy Sector, the first phase of development will include 14 flexible business units which will be completed by 2023. 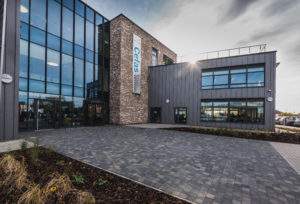 Working with partners across both the public and private sector our ambitious plans build upon Cefas Head office in the town and the Maritime Skills Centre at East Coast College. Cefas currently employs 300+ practising marine scientists at their recently regenerated headquarters.

Demand for marine science skills and expertise is expected to increase within the region with the continued development of wind farms just off the East Anglian Coast and the proposed Sizewell C nuclear power station. The opportunity links closely to the recommendations as set out in the town centre masterplan, with the ambition to provide an innovation axis within the town centre.

The project involves the development of a Marine Science Campus which will deliver a dedicated, academic institute in Lowestoft along with business support services for the sector. It will support the growing demand for higher education provision within the marine science sector, which is expected to boom with the growth forecasts within the clean energy sector. 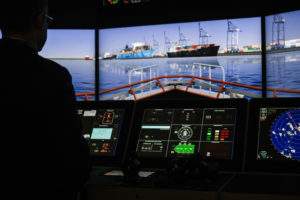 This project delivered by East Coast College will provide a framework to move people who are currently not in employment, education or training (NEET) into sustained employment and apprenticeships. The uniqueness of the project is that not only will it provide skills and employment training, but also supported work placement elements which will match students to future vacancy openings, in turn providing the student with a gradual entry to work (with mentoring) as well as providing the employer the opportunity to see the person in the workplace and nurture them for the future. 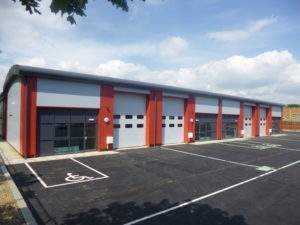 East Suffolk has three of strategically important employment sites in Lowestoft which are part of the New Anglia – Great Yarmouth and Lowestoft Enterprise Zone. The scheme is a joint venture between New Anglia Local Enterprise Partnership, Suffolk County Council, Norfolk County Council, East Suffolk Council and Great Yarmouth Borough Council, with a focus on growing energy related businesses and creating high skilled jobs. Since 2013 the scheme has attracted £44.5million of public and private sector investment across East Suffolk by providing new premises which attract small, medium and large businesses. To date the scheme has  supported 30 business and created over 900 jobs.

Each site has access to broadband and a simplified planning process for development. Business support is also available from the New Anglia Growth Hub who will be able to advise on potential grants and financial aid available.

The 3 Enterprise Zone sites in Lowestoft are:

Mobbs Way is 4.7ha of employment land and is ideal for small businesses or start-ups who are ready to take their next step to expanding their business. The site has been successful ever since it opened with a total of 32 units on site ranging from sizes 140sqm to 418sqm . There is a wide range of businesses operating from Mobbs way, from engineering to builders and media companies.

The 4.5ha site is situated within Lowestoft’s inner harbour, located to the South of Lake Lothing. The site can be accessed by the A12 via Waveney Drive and is surrounded by a mixture of residential, retail and office uses. This enterprise zone already accommodates a number of civic uses and is expected to provide further opportunities for office uses. The Development for the Gull Wing River Crossing will be taking place at Riverside and will be providing a key infrastructure improvement to Lowestoft.