You are here: Home - Regeneration - Celebrating Our Culture & Heritage

Lowestoft is experiencing a cultural renaissance and reinventing itself as a place that is creatively edgy. People flocked to the south beach in 2019 to enjoy the First Light Festival during the summer solstice, and before 2020 the Marina Theatre, one of three theatres based in the town, would welcome 80,000 audiences annually to their theatre productions and cinema.

The town is also steeped in history, largely due to its role in the fishing and shipbuilding industry, and has a range of volunteer-led museums and heritage centres. Artists are inspired by the expansive landscape with big skies and wonderful light, sandy beaches and links to the Broads National Park and Carlton Marshes. There is a strong emerging creative sector, and more creatives producing in the town than ever before. To support the sector, in 2021 we launched the Virtual Creative Hub which provides support, networking events and workshops to creatives delivering work in the town.

We want Lowestoft to be a place where people can enjoy our arts and heritage offer, and have the opportunity to create and produce work in the town. Our 5 year vision for culture is laid out in our Lowestoft Cultural Strategy – Celebrating Culture on the Edge: A New Dawn.

Follow the cultural conversation by using #LowestoftCulture via our social media pages.

Concept image of the Historic Quarter

The project will take a conservation-led approach to bring forward benefits beyond the scope of the Heritage Action Zone (HAZ), through improving the built environment to create a sense of place, improving community confidence, and adding to the visitor destination offer to increase economic growth. As a result of the towns relationship with the herring industry, Lowestoft grew in size and fortune, leading to a population of c.2500 (mid-1800s) living below the cliffs and shop keepers living and trading on the principle High Street west of the cliffs. Today, there remains the remnants of fish sheds and merchant houses and 11 surviving medieval passageways (known as Scores), these assets help to tell the story of the town’s rich maritime heritage.

This area is under threat from insensitive development and poorly maintained buildings and is on Historic England’s Heritage at Risk Register. This area not only includes some of the oldest parts of Lowestoft, but also the north section of the long linear town centre, which serves some of the most disadvantaged communities (IMD) in England. In 2018, this area was awarded Heritage Action Zone (HAZ) Status and in 2020 was master planned as a historic character area (Historic Quarter) in the Town Centre Masterplan.

A feasibility study of the Grade II Listed Town Hall, which has been vacant since 2015, determined that the preferred option is to adapt the building as a mixed community use. 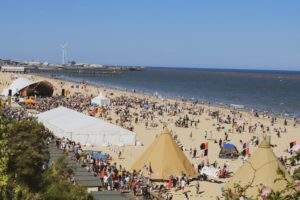 Linked to First Light’s themes of time and tide, the year-round programme will include a winter fair, Easter celebration and late summer bank holiday event, all with music and cultural activity, food and drink traders and a range of local producers. There will also be regular ticketed events targeted at a Lowestoft audience, that by the end of the project would take place monthly. Linked to and promoted by the First Light Festival brand, the pitch fees, drinks commission and ticket income from the year-round events will increase so that by 2027 they will be self-sustaining.

This project will support an annual First Light Festival that will embed cultural growth by supporting year-round activities that promote and utilise local cultural assets including the seafront, Historic Quarter, Cultural Quarter, and the Ness Park.

The project will drive investment in the cultural sector, attracting creative industries and people to develop Lowestoft into a cultural hub. It will increase interaction with local communities and artists, demonstrating an ongoing commitment to cultural regeneration activity, increasing opportunities for social interaction and growing social cohesion.

The Lowestoft Heritage Action Zones are heritage-led regeneration projects which use the historic environment to stimulate economic, social and cultural growth.

The North Lowestoft Heritage Action Zone (HAZ) was established in 2018, and focuses on the North Lowestoft Conservation Area which includes the medieval High Street, Scores, historic smokehouses, net stores, and Lowestoft’s once fine Victorian Parks. The boundary also includes areas closely bordering the conservation area, including those earmarked for new residential development to the west, the industrial setting of the PowerPark, and the open space of the UK’s most Easterly heritage park, The Ness.

In 2020, the North HAZ was joined by the London Road, Lowestoft High Street Heritage Action Zone (HSHAZ) which encompasses part of the South Lowestoft Conservation Area.

The Heritage Action Zones champion the value of heritage within high streets, using heritage for positive change and to address the current decline facing the areas. The projects encourage sympathetic and sustainable improvements to the built environment, where communities have pride in place and are actively engaged in the area’s protection and presentation through a programme of events and training, and will become a more vibrant place to invest in and do business, where the historic character and environment brings forward new ideas and innovation.

Lowestoft is one of only seven places in the country to benefit from two Heritage Action Zones and is joint funded between East Suffolk Council and Historic England, delivered in partnership with Lowestoft Town Council, Lowestoft Vision (Business Improvement District and part of the Suffolk Chamber of Commerce) and the East Suffolk Building Preservation Trust.

In October 2020, Think Lowestoft submitted projects for consideration to MHCLG as part of the Lowestoft Town Investment Plan, with the Heritage Action Zones featuring heavily in strategic priority and vision for for the town.

Why not read our Heritage Action Zone newsletters?